Once favoured construction firm of the first Orban regime and the following Medgyessy government went bankrupt in the spring of 2011 with billion forints worth projects in process. Vegyépszer Hungária Zrt. forced its creditors to accept a highly unprofitable contract in a procedure influenced by initiated creditor members which made them lose 99% of their claims. Vegyépszer now seem to get away with paying tens of billions to its creditors cheap by gathering the majority of creditors to its own interest. Others are trying to prove their rights through legal cases, now several suits are before the Budapest Tribunal on an appealable level.

Vegyépszer’s bankruptcy proceedings’ legality is doubted in several aspects. Cash and Limes Zrt, Vegyépszer’s bankruptcy trustee had been nominated by court which is against the law – court nominated a former Vegyépszer employee to serve as trustee in bankruptcy. Creditors doubt not only the settlement, but the selections of courts dealing with their cases as well. A 4.5 million euro worth, EU-financed construction project ran by Főép Kft. in Szombathely remained unpaid with almost 1 million euro debt to Vegyépszer’s subcontractor. The creditors claim had been refused by the Budapest Prosecution Office and Curia as well.

Government offices also denied their competence in the later aggrieved Főép’s case was attached to the civil suit against the meanwhile bankrupted construction giant. Most of Vegyépszer’s creditors belong to the giant’s main owners which does not seem curious in the court’s eyes, neither the fact that these companies started to buy independent creditors’ claims months before the bankruptcy proceedings. These companies got more voting rights in the following procedures by this trick. Some new denunciations were reported to Budapest Police Department (BRFK) this May which they forwarded to the National Tax and Customs Administration (NAV). NAV’s president is Ildikó Vida, who was vice-president at the authority, while it was led by Lajos Simicska in the first Orban-regime. Between 2002 and 2010 Vida worked for Mahir Zrt, a Simicska-related media giant. Vegyépszer is also concerned in Fidesz-related companies through its owner Inforg Zrt and rightist entrepreneurs István Tóth and Csaba Nánásy, who are involved in the bankrupted giant and its many creditors too. 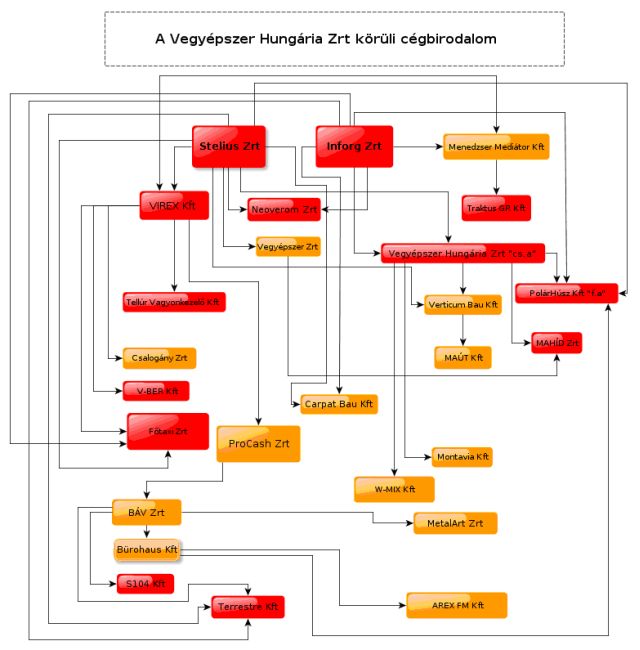